Let's first add View Model in application flow, then we will discuss data annotation and Tag Helpers. We have created a Get Details functionality in our previous discussion CRUD operations in ASP.NET Core 1.0 MVC Application Part 1. As we can see that we have hard coded Headings and embedded code to generate required HTML. Although this approach works fine for simple views, but we have to take care of lot of things and to write lot of code to handle features like forms and validations.
Similarly, it is not a good practice to use Models associated with Data Source like Entity Framework or Data Contracts from Services in Views. Instead of them, very concise and simple models are passed to views which called as ViewModels. These ViewModels are based on concept of POCO (Plain Old CLR Object). We will discuss pros and cons of POCO or ViewModels in detain in different session.

We have placed sample code for this session in "CRUD operations in ASP.NET Core 1.0 MVC Application Part 2_Code.zip" in https://aspdotnetcore.codeplex.com/SourceControl/latest CodePlex repository.

We have placed sample code for this session in "CRUD operations in ASP.NET Core 1.0 MVC Application Part 1_Code.zip" in https://aspdotnetcore.codeplex.com/SourceControl/latest CodePlex repository.

Let’s discuss structure of ASP.NET Core MVC Web Application Project. We are going to use project created in our last discussion Welcome to ASP.NET Core 1.0 MVC. We have following major areas: 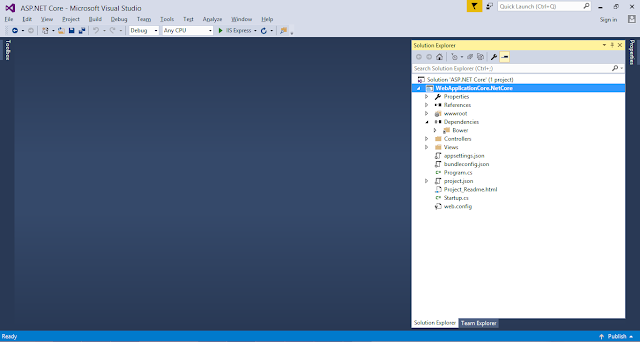 Properties section contains launchSettings.json file which has project settings. Although it can be edited directly, yet it is generally edited by other interfaces like project properties. 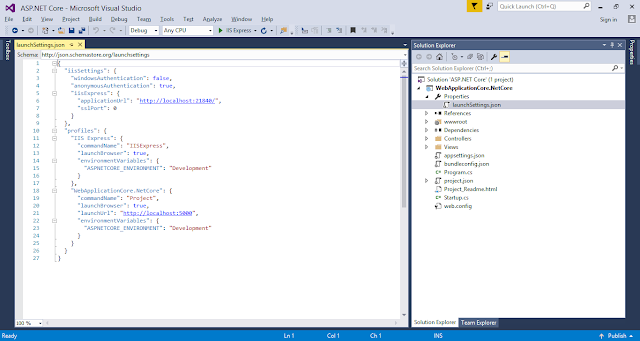 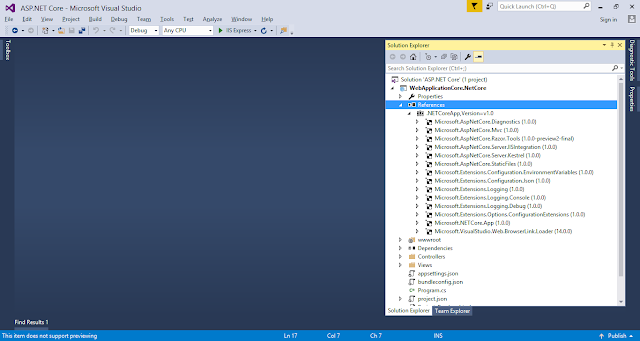 We can add new references directly or through NuGet Packages.

wwwroot is a special folder which contains all the static resources like css, images, JavaScript and included libraries. Visual Studio Template uses wwwroot name by default, but we can change it as per requirements. 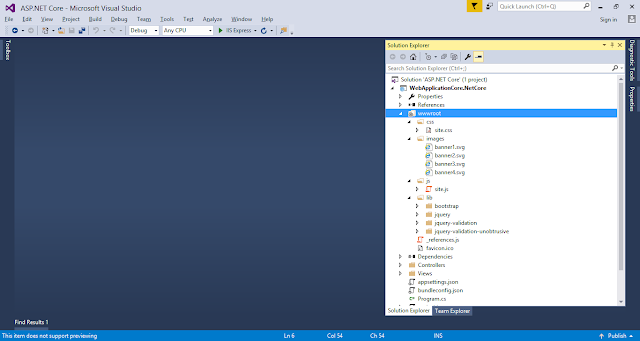 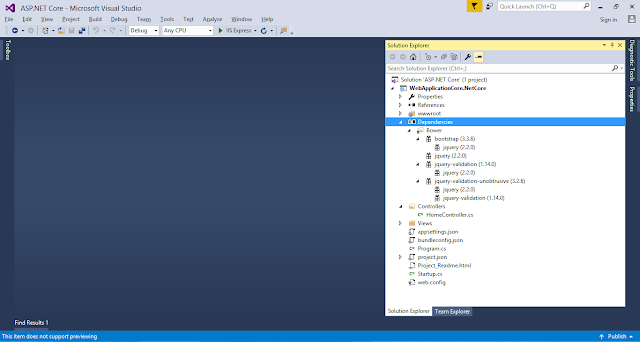 We can add new bower through Manage Bower Packages. 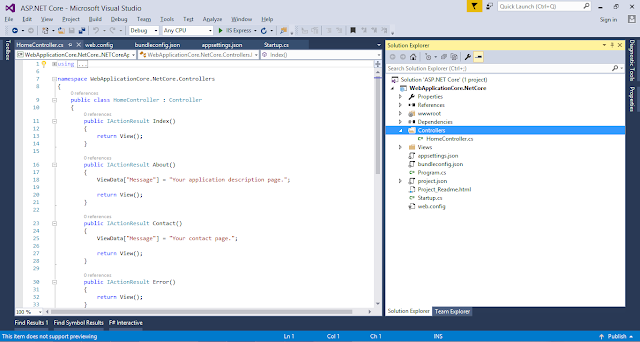 All the views related to a controller have views in a folder named to that controller. This example Home folder contains views for each action method of HomeController.

Shared views folder contains: _Layout and Error view. _Layout view contains layout of application and in term of ASP.NET it replaces Master Page. Error view contains the implementation of error page which is displayed to end user in case of any error.

While there are 2 special views in this template: _ViewImports and _ViewStart. _ViewImports contains the list of imports for all views. And ViewStart contains generic page initializations like layout globally. 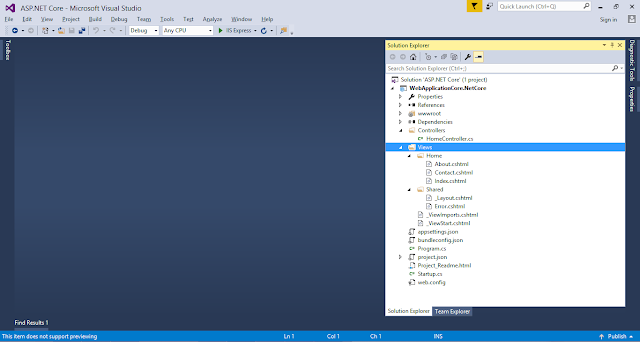 Program.cs contains Main method, which is starting point of application. It initializes WebHostBuilder instance and starts the host environment. We can set web server related configurations in this area. We will have complete detailed discussion on this item separately. 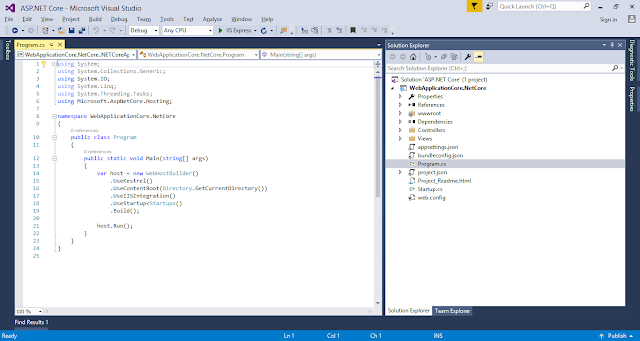 Startup.cs contains main implementation for Environment Startup. This class not only initialize basic environment configurations and request pipeline but also other features like logging, error page and routing. We will have complete detailed discussion on this item separately. 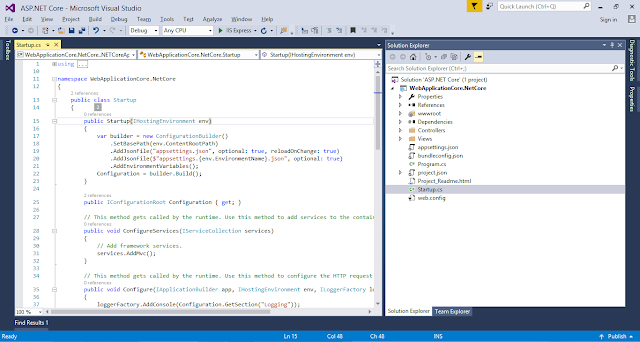 This template creates different configuration files of .config and .json type at root of project:
These files contains application settings, configurations related to bundling and minification and project settings. We can also use ini files, environment variables, command line arguments and even custom configuration provider. We will have complete detailed discussion on this item separately. 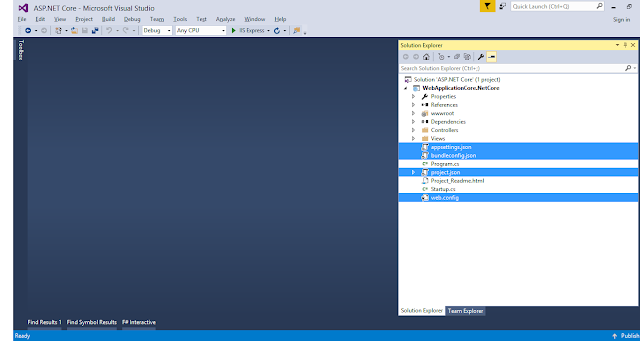 .NET Core is a latest and emerging development platform for web applications, services and console applications by Microsoft. It is important to note that it was initially named .NET 5.0 or .NET Core 5.0. By features, it is sub set of .NET 4.6 framework. It offers following matchless features:

.NET Core is open source, which means it is free of cost and its source code is available. We can get advantages of community work supported by Microsoft.  We can not only review code, but can add new features or fix bugs as per needs (as per open source license).

.NET Core is cross platform. So you can build and execute same application code on any operating system of your choice. At the moment supported operating systems are Windows, Linux and MacOS.

.NET Core has been built to be modular platform, so you have to pay for play only. This decision has been made to make .NET Core simpler and easier to implement for cross platforms and to make it lightweight and faster.

.NET Core has provided many modern features like generics, LINQ, asynchronous programming. And many other advancements like WCF, UWP, F#, Visual Basic and other language support are under process.

.NET Core is a new implementation from scratch. It is in its initial phases and it is not complete yet. At the time of this atrial, it only supports C# while Visual Basic and F# are not supported yet, but soon they will be part of .NET Core (in couple of months approximately). Similarly, SignalR support has not been delivered yet. It only allows development for web applications, services and console applications while other development tools have not been announced yet.

Due to modular platform design, we include minimum number of modules as per requirements. This make overall package lightweight.

Being lightweight and having better implementation, .NET Core application is 3 to 8 times faster than its competitor.

It is lightweight, having high performance. It is claimed that an application implemented in .NET Core can server more than 20 time of requests per second. Please refer to open source benchmarking project and its details at https://github.com/aspnet/benchmarks.


Easy to Learn and Easy to Manage

.NET Core is very simple for both of new and legacy developers. You have a lot of resources available online.

Obviously, we are going to consider .NET Core as first choice as development framework. But consider following before making final decision:

.NET 4.6 is a latest full .NET Framework and it is main development platform for windows. It is a mature platform having many features including famous features like WPF, WCF, WF, ASP.NET (Web Forms), ASP.NET MVC, Win Forms, SignalR, Console Applications and many more. It has following characteristics:

Let’s create our first ASP.NET Core MVC Web Application. We assume that we already have Visual Studio 2015 Update 3 and .NET Core 1.0.0 - VS 2015 Tooling Preview 2. If you have not installed .NET Core yet then I may recommend you to follow our initial discussion How to install .NET Core 1.0. Alternatively you can follow Microsoft Official Site directly.

We have placed sample code for this session in "Welcome to ASP.NET Core_Code.zip" in https://aspdotnetcore.codeplex.com/SourceControl/latest CodePlex repository.
Posted by Imran Javed Zia at 06:00 No comments:

Visual Studio Code is a free open source and cross platform editor. We can download it from https://go.microsoft.com/fwlink/?LinkId=691978&clcid=0x409 free of cost. Please refer to https://beta.visualstudio.com/free-developer-offers-vs/ for more details.

We can also follow official page https://www.microsoft.com/net/core to get more details, latest updates and other installers for Linux and Mac platforms.

Imran Javed Zia is an energetic individual with result oriented approach. He has been serving IT industry since 2004 as Microsoft Technology Specialist. He got a chance to work on WCF, Web Services, Web API, Windows services, WPF, SilverLight, WinForms, Microsoft Dynamics AX and other tools and technologies like AngularJS, HTML, Charts, and Reports. But C#, VB.NET, ASP.NET MVC, ASP .NET and MS SQL Server are his favorite areas.

He believes “Success of Everyone is Success of a Team, and Failure of anyone is Failure of a Team”. He is a Scout and love to serve community whenever and wherever possible.